Inflation at the Wholesale Price Index Level (WPI) for all commodities is now only announced once a month. Only one part of it – Primary Articles, which includes Food, Cereals and Grains – is announced weekly. As of yesterday that’s showing inflation at very high levels – the number announced yesterday had Primary Articles Inflation (year on year) at 14.56%. 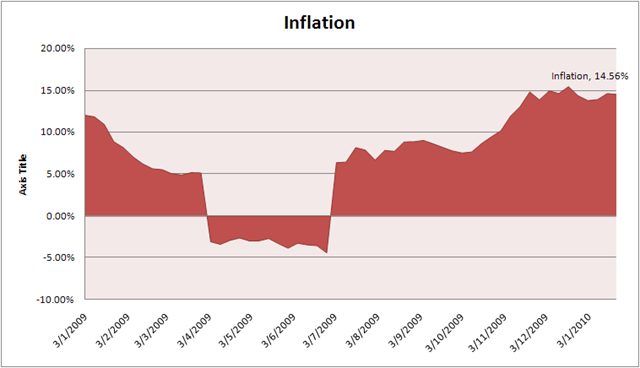 At the food level, a bad crop last year has resulted in shortfall, but it has been exacerbated by hoarding at various levels which has political patronage. NREGA has impacted harvesting too – people who would otherwise harvest fields, or seasonal workers, now prefer the cushy job of getting paid while sitting around the concrete fencing of a long-built canal, because that’s a lot less work than harvesting. Mix that with around 40% wastage and the reluctance of Mr. Pawar to release the insanely high levels of stored inventory in government storage (FCI) that will surely rot unless we let them go. Plus the losses in government storage/supply is about 40%. The next crop will only get through in March-April, which won’t help things unless we actively fix the problems mentioned.

Enough sermonising. Prices are up. They should go down. I think they will. Let’s see.