Markets went berserk today. They obviously loved the budget, and tripped on Pranab-da’s speech so much they nearly touched the 5,000 mark before rolling back. The Nifty closed at 4922, up 1.3%, which isn’t a lot; but it was up nearly 3% during the day. 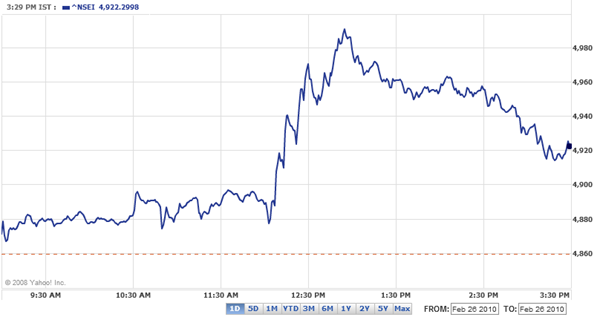 Turnover was amazingly high today, with 116,000 cr. traded in the F&O segment, and 18,000 cr. in cash – both very high values for what is the first day of the next expiry cycle.

Given that this is an inflationary budget, it’s surprising that banks went up – but they did. The Bank Nifty was up 2.2% at 8722, and some NBFCs like Reliance Capital and IDFC were up more than 5% on the news they might get banking licences. Fat chance for Reliance – RBI will never let a corporate house own a bank, but don’t let logic stop you. Canara Bank was up 3.25% at 394, whic

Auto stocks went up dramatically largely towards the end, as the FM announced that he’s hiking excise duty for cars back up 2% and taking away the stimulus. It might just have been panic buying, or short covering; only Tuesday will tell us. TataMotors, M&M and Hero Honda  were up more than 5% each, with Maruti close by at 4.73%.

What went down? ITC was down 5.7% and I’m kicking myself for not shorting it right at that cigarette duty increase announcement. Tatapower was off 4.36% too, for reasons I can’t quite fathom. Real estate stocks were flat – they didn’t have much to cheer about. The Tech pack ended weak but not substantially – less than 1% down – due perhaps to the Minimum Alternate Tax announcements.

Disclosure: Am actively trading the market and have positions currently open. I’m not at liberty to disclose directions and stocks at this point.