There’s been a substantial increase in membership – their presentation says that as of Dec 31, 2009 they had about 110,000 members.

But the number of rooms is only at 1,403 over all resorts. Since they sell a week per customer per year, that’s 72,956 members they can satisfy this year. This is where the equation breaks down.

Even if ALL the members were evenly distributed among the year, about 37,000 members won’t be able to get  a room. And most people will want to holiday during certain seasons or holidays, so it’s unlikely to have even distributions – which means bunching of customers at holiday weekends, and therefore even lesser supply to demand. What happens to the dissatisfied customers?

And then, they black out certain dates – most members can’t do their holidays in the ultra-peak season of December end and so on. Plus, they sell their inventory outside – I just got a message telling me about an all-meals package for 3 nights in Club Mahindra Goa, for non members, for 16,000 per head including airfare to and fro from Delhi. If I took it, I’d steal away a few days off some other potential member’s holiday.

I was concerned about this even last year during the IPO (Read my view on the IPO) but apparently I was the only person who cared – memberships have soared from 96,000 to 110,000 while rooms only moved from 1261 to 1403 (available weeks from 66K to 72K). That means even MORE people should be unsatisfied today.

On the other hand, RCI affiliation offers members places to go when no Club Mahindra owned property is available. Yet, that’s a lot more expensive and you can’t expect 35% of members to go that route.

So I’m not particularly fond of this equation but the stock has done well. At Rs. 431 today it’s gone up 30% from the IPO price of Rs. 300, though it’s seriously off it’s highs of 530. And, it’s beaten the Nifty handsomely. 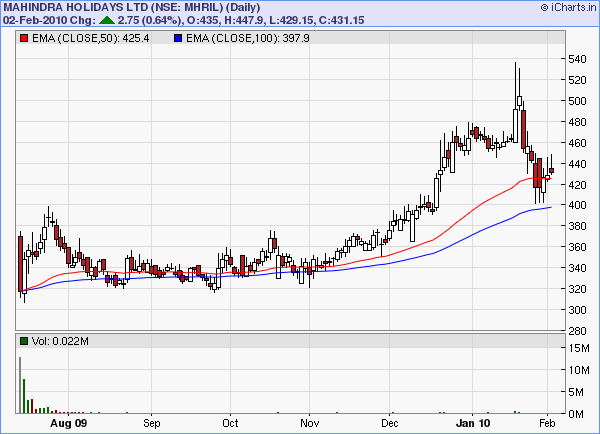 Question for you: Would you buy this stock? I wouldn’t on pure fundamentals – somewhere this stock is going to hit a wall, I feel. But I’d love to hear opinions.