Bharti Airtel decided to acquire Kuwaiti telco Zain’s African Assets for $10.7 billion – nearly 50,000 crores. Since then the stock has tanked: 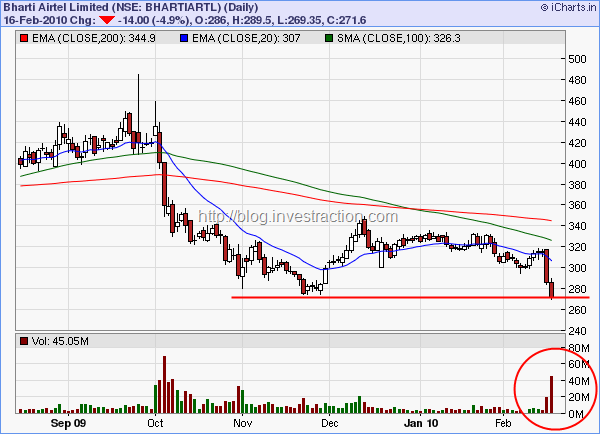 There are those that say Bharti has overpaid. Livemint says they’re desperate to deploy cash and are paying a 55% premium for Zain in comparison with Bharti’s own valuations. (EV/Ebidta wise; it sounds like mumbo jumbo but in acquisitions it’s a useful comparable ratio)

Yet, it’s mired in controversy. The EV figure – Enterprise Value for the curious – contains nearly 40% as “goodwill”. The wool is hurting my eye now. Otherwise, the operations are still not profitable: The African assets reported a loss of $35 million in 2008! To add to the misery, the ownership of the Nigerian unit is up in the air; there’s a legal battle on. Nigeria accounts 21% of Zain’s worldwide customers and 16% of its revenue – the largest customer concentration for it, even greater than the home base of Kuwait.

[Goodwill is real mumbo jumbo – you can “invent” it through acquisitions. Acquire a company, say you got so much goodwill because you paid higher than what you should have paid, and capitalize that amount on the balance sheet. Companies have done this forever, and it works until…it doesn’t. ]

With annualized EPS expected around Rs. 25, I’d imagine that 10 P/E is where it should stop falling. But Bharti has no choice really – with Indian competition eating into its profits and market share, it has to go abroad. A few years of pain will happen. How they respond will determine if they become a great entity or simply become irrelevant.

Without taking a fundamental call on Bharti, the charts indicate serious dramatic damage. A pull back rally will happen, but I have no idea from where; if it breaks this support level, there’s hardly anything in there till the 200 levels. (229, the 1 year low, was an intraday low in November – doesn’t quite count as a support)