I’ve been working with a system we had developed over 18 months ago at Moneyoga, and the results have luckily been charming. 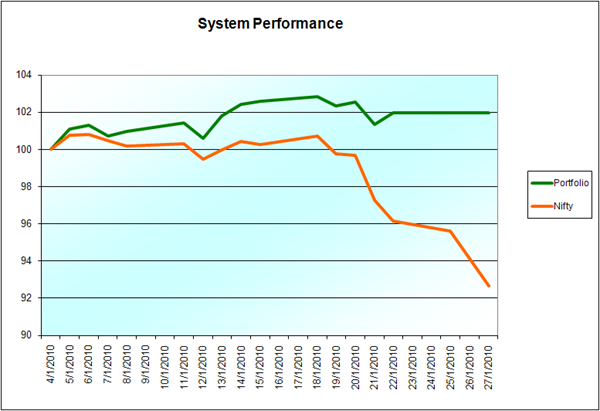 I’ve only had to take four trades, two long and two short. I’ve had no signal since the 22nd as the system does not throw up a signal when option values are too low to cover brokerage costs. Now I must retest that system using further dated futures and options – a task I have decided to use Python for and am learning the concepts of that scripting language.

This system’s been quite decent on back-testing; About three years is shown here: 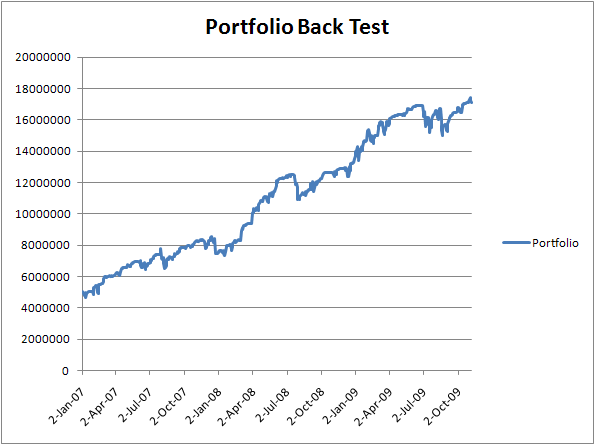 I have about five years of data but some of the instruments used weren’t liquid at all in 2005, so it is unreliable. The system has seen a drawdown (peak to trough) of about 18% – but it’s likely to see something as much as 30%, from another statistical analysis test I’ve done. (See Carstens’ ultra-useful tool, which we modified to be more rigorous)

On the back test the system has seen about 55% gains compounded annually (242% flat), and with a 30% potential drawdown the  of the system the “system heat” (risk adjusted return or return/drawdown) is greater than one.

It’s done about 2% on one month of live testing with real money behind it; will have to wait a few more months, increasing money allocated each month as I gain confidence. Note: not revealing the details of this system here; and the purpose is not to sell the system or it’s output as tips. This is just a log entry.