Supports and Resistances are concepts very well embedded in trader’s heads. Support means a place where you expect the market to stop falling and Resistance is where you think it won’t go further.

So the concept of “Support broken” typically means “I thought it would stop here but it didn’t”. Which of course, to a layman appears like “so you thought wrong” but to the trader it’s like “Oh shit, something bad is going to happen”. We don’t know why we think like this. But we do. And because a lot of traders do, it tends to become reality – if I buy back my shorts at support points, I become the support and if enough people are like me…self fulfilling prophesy. (That rhymes!) 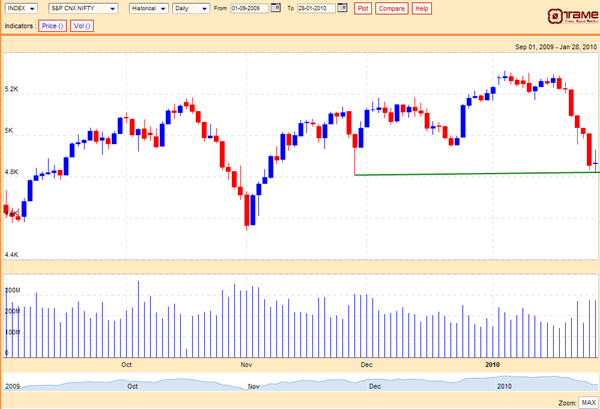 The Nifty is at a point where it reversed in the last shady fall in December. It looks like a temporary support point at around 4800, and we held on today. But how are we doing with other support levels? 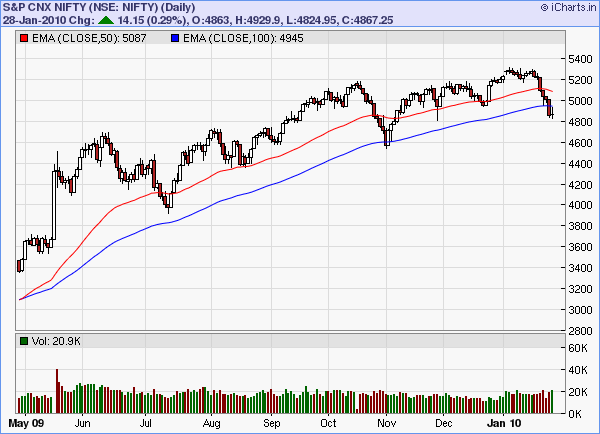 It’s broken the 50 and 100 day moving averages. These supports become resistances on the way up. The Nifty has also broken a longer term trend-line.

In general, I’d be wary of taking action based on these points, but because so many traders and market players look at them, it’s useful to keep an eye for breakdowns.