The NSE Nifty drops about 4.5% since it hovered around the 5275 levels early last week – with the last four days being falls on higher volumes. 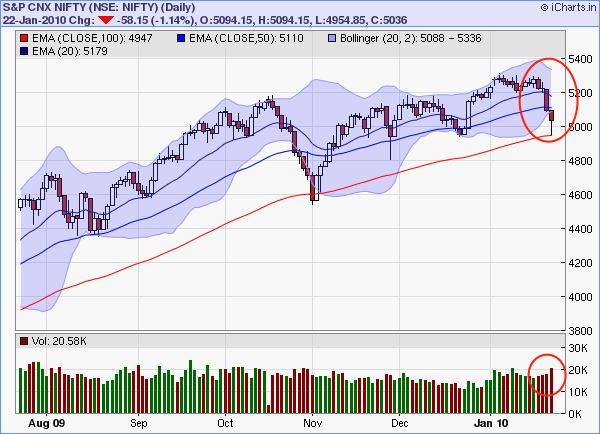 The Reliance results – spectacular in their increase in profits – saved the day on Friday, with the index going below the 5000 levels briefly before it recovered to 5036.

Futures and options turnover was very high – in fact, the second highest on record, at 132,000 crores. But cash turnover wasn’t all that great – so the action may be a trading move for now. 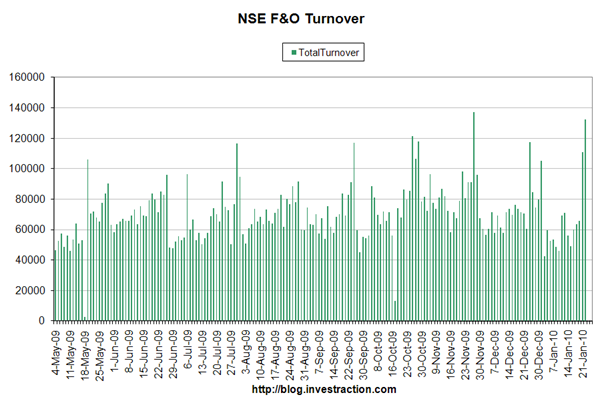 What happened really? Obama called for limiting the size and risk of banks in the US and US markets tanke 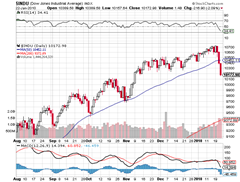 d – in fact, they have fallen nearly 6% in the last three days. The proposals limit lending to hedge funds and more importantly prohibit banks from trading for profit. Meaning – prop operations at bank companies like Goldman Sachs and Morgan Stanley will have to go. Since thes banks generate substantial volume through its prop trading, there is reason to believe that the lack of their liquidity will be bad for markets. Though, let’s be honest, what’s bad for markets may not be bad for the economy.

If this rule goes through it will not mean a stop on trading – what it will mean is a demarcation between banking and trading. That means people who trade cannot leverage the value of an identity that is known for staid banking – i.e. loans and deposits – and instead, will have to finance themselves solely on their own merits. The best traders won’t have a problem with that – and will set up their own shops, and gather money to trade. Trading, after all, hasn’t been banned. Banks will go back to being banks rather than hedge funds, making later rescue efforts, if required, highly palatable.

Volcker has had that view for a while and overall, I agree. It does destroy any hopes of a career as a high flying trader with a bank and access to literally unlimited capital; but I can’t be bothered, risk is risk and if the banks don’t stop trading with taxpayer guarantees, the rest of the trading field will forever be marginalized.

Anyhow, that’s supposedly the reason Indian markets fell too, anticipating fund flow outwards. Which has happened, it seems – the Rupee has fallen nearly 3% to around 46.3, and FIIs sold over 2400 crores of cash stocks on Friday (though Domestic institutions bought nearly 2,000 crores to offset that). Technically, there’s weakness – we are close to the 100 day average, a key support level at around 4950 and the Dow has broken it’s 50 day average (key for that market). The next few days, to say it lightly, will be interesting.