HDFC announced results yesterday and produced an Earnings Per Share (EPS) of Rs. 22.65, a 20% growth over Q3 FY09 (Rs. 18.89). Profits were at 671 cr. – which grew 22% but then they issued more shares so EPS grew less than that. If the share price crosses 3,000 the dilution effect will be more because they have to consider the impact of the options they sold earlier this year, which dilutes them another 3.5%.

The stock fixed itself a little bit after falling a lot at result announcement, but has been going down for the last month or so (10% down from the highs) 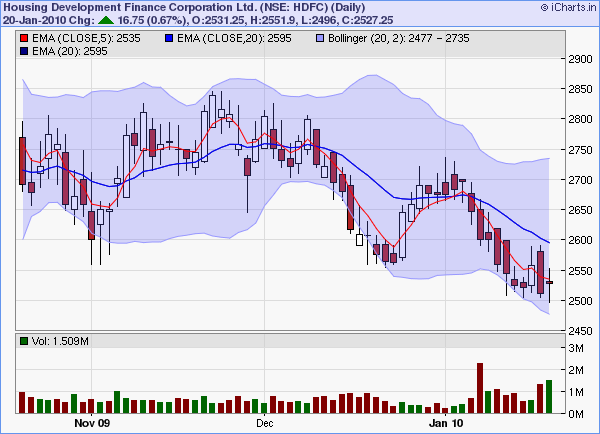 HDFC benefited from an early teaser rate program of 8%-8.5% for three years, and then a reset. But now all banks have caught on, and some are offering one year teasers as low as 5.5%. And the RBI has been cutting off access to funds for NBFCs slowly, so they don’t get to work the spreads as low as they used to; an increase in short term rates will affect margins adversely.

Their NPAs are at 0.94%, of which about 4/5th are covered by provisions. NPAs are 90 day delinquent loans; if the real estate market improves this should only come down (or be recoverable) On a book basis, HDFC at 4.2 P/B is one of the most expensive (consider that most banks are available for near 1).

Insiders have continuously been selling. Some seem to be buying but that’s funny accounting – they exercise ESOPs and buy back some shares with a small portion of the proceeds, and show it as a net buy (this is a wrong way to report it, but nobody gives a damn).

HDFC owns stake in their mutual fund and insurance businesses; the insurance company still makes losses, but the AMC fund business generated about 129 cr. of profit last year (margins of 29%). Plus, they have a stake in HDFC Bank which has some value, though they are unlikely to sell it.

Overall it’s the size effect, pretty solid management PR and the subsidiary potential that gives them a slight advantage. But as one of the most expensive fin businesses, it’s not showing the growth of the strong and highly valued players in that space – a better bet would be Axis Bank or even its owned HDFC Bank, both growing EPS in excess of 30% yoy.