Credit Growth as of Jan 1, 2009 was at 13.61% year on year, with total outstanding credit crossing 30 trillion rupees for the first time ever. 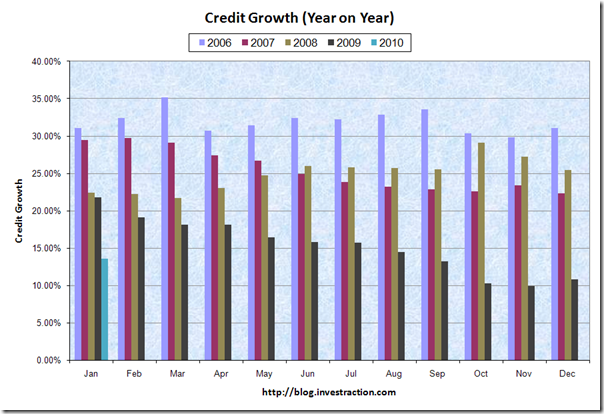 It’s the lowest growth in five years though it’s starting to perk up. Banks are starting to lend again, it seems.  There are interesting regulations out there that will change the lending framework.

From bank lending direct, corporates may choose to borrow from the market through corporate bonds, a market that has seen very little focus. But that’s starting to change. RBI has just allowed repo on Corp bonds. Repo means Repurchase agreement, and is typically used as collateral while borrowing (“You buy these bonds from me, I repurchase from you at same price+interest”) So anyone with corporate bonds in their portfolio can use it for borrowing, starting March 2010. Why was it not allowed earlier, you might ask, and Tamal Bandyopadhyay writes on LiveMint about the history:

After serious irregularities in securities transactions that led to India’s biggest stock market scam in 1992, RBI came down heavily on such deals, but the restriction on repo existed even before the scam. A June 1969 government notification, under section 16 of the Securities Contract (Regulation) Act, 1956, prohibits any person from entering a repo deal without its permission. Globally, central banks use this short-term instrument to iron out excessive volatility in the money market. In India, too, RBI has been doing this and it is the sole authority to regulate this market.

In 1987, it even said that the units of the erstwhile Unit Trust of India, the country’s oldest mutual fund and a proxy for any sovereign paper, could not be used as collateral for repo deals. As the repo market grew phenomenally and there was rampant misuse of the facility, in 1988 RBI prohibited banks from entering into repo deals with non-bank clients.

In fact, the genesis of the 1992 stock market scam was a thriving repo market. Some banks used repos to understate their actual liabilities, by advising non-bank customers to lend them money by way of repos instead of placing the same in the form of deposits. There were others who first committed to borrow through repo deals and later invested the funds in securities. In many cases, commitments to repurchase or resell the securities were not even documented. RBI banned repo deals and barred banks from undertaking repos in government bonds and other approved securities with effect from 22 June 1992. Repos in treasury bills, however, were exempted from the prohibition. The restrictions were lifted in phases. In 1995-96, RBI partially reopened the market only for specified government securities, but only banks and primary dealers that buy and sell government securities were allowed to strike repo deals. At the second stage, in 1997-98, all government securities and treasury bills were made repoable and in 2003, mutual funds were allowed into this segment.

Now double-A and better rated corporate bonds are being made repoable but certificates of deposit, commercial paper, and non-convertible debentures of less than one-year tenure will not be eligible for undertaking repos.

Apart from this there are no FII limits on investing in corporate bonds (or it’s an obscenely huge number) – versus foreign investment in govt. debt being capped at a very low number ($200m per entity).

If the corp bond market develops, bank lending may not be a good enough measure. We’ll have to see the overall credit growth picture, which RBI may need to provide in their reporting more often.