Twenty seven years ago, a 61-year-old Cliff Young showed the world what legends are made of. [HT Gautam @gkjohn]

There’s an 875 km. race in Australia every year, between Sydney and Melbourne. Usually the race runs over five days, and at the time runners would do 18 hours of running and 6 hours of sleep. They work branded shoes, and were sponsored by large companies.

Cliff Young showed up in work boots, to run the race.

The press and other athletes became curious and questioned Cliff. They told him, "You’re crazy, there’s no way you can finish this race." To which he replied, "Yes I can. See, I grew up on a farm where we couldn’t afford horses or tractors, and the whole time I was growing up, whenever the storms would roll in, I’d have to go out and round up the sheep. We had 2,000 sheep on 2,000 acres. Sometimes I would have to run those sheep for two or three days. It took a long time, but I’d always catch them. I believe I can run this race."

Cliff ran, but not just the 18 hours the others did. He ran all night, with those shoes, and caught up with the faster runners who lost time when they slept. Eventually he passed them all and won the race and a prize of $10,000 – which he donated to other runners because he wasn’t in it for the money.

In the following year, Cliff entered the same race and took 7th place. Not even a displaced hip during the race stopped him.

Cliff came to prominence again in 1997, aged 76, when he attempted to raise money for homeless children by running around Australia’s border. He completed 6,520 kilometers of the 16,000-kilometer run before he had to pull out because his only crew member became ill. Cliff Young passed away in 2003 at age 81.

Today, the "Young-shuffle" has been adopted by ultra-marathon runners because it is considered more energy-efficient. At least three champions of the Sydney to Melbourne race have used the shuffle to win the race. Furthermore, during the Sydney to Melbourne race, modern competitors do not sleep. Winning the race requires runners to go all night as well as all day, just like Cliff Young. 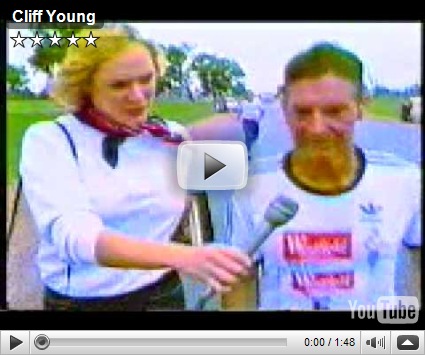 This is such an inspiring story.