Indian Tax Revenues, as I’ve said earlier (Where are the taxes?), are not quite reflective of the buoyant mode of the market. 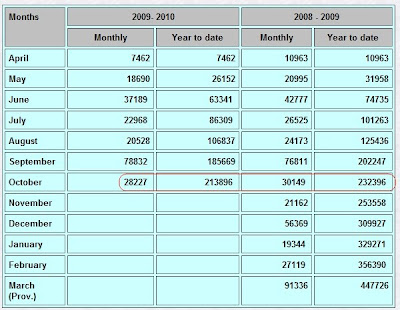 As you can see, October taxes alone have dipped from 30K cr. to 28K cr. Think about it – October was Diwali this year, which is usually bonus time (so more direct taxes, one would think). But since TDS is paid by the 7th of the next month, it may not count in October just yeat. Diwali was in November last year, so some distortion will be apparent. (Additionally, there was a part of one-time government salary arrears – the fifth pay commission increase – paid out in October 2009, which should have caused an increase in net tax collections; only it doesn’t look that way)

Let’s take a look at the expenditure. 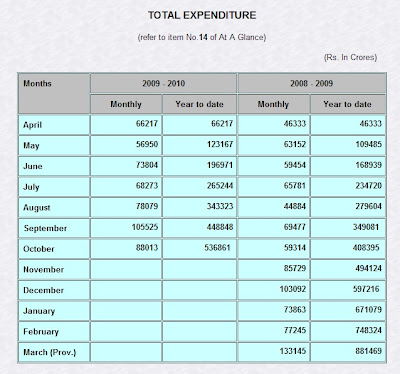 As you can see, expenditure is up about 30% – from 4.08 trillion to 5.37 trillion, year to date. Basically, as a country we are earning less and spending more.

Further down on the page, is the terrible figure for the fiscal deficit. The total deficit now is Rs. 2.45 trillion versus 1.17 trillion last year : that’s nearly a 50% increase in deficit from last year!

If we are really improving, it should show in our taxes. Let’s see what December has in store.