Info Edge (NAUKRI) continues to astound me. They’re literally flatlining EPS for the last six quarters, and yet, command a P/E of 35!

To talk less and show more, here’s a graph of their revenues, stock price and PE/EPS comparison. 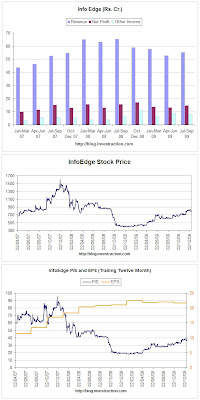 Maybe people expect great things of Info Edge, but it’s been a disappointing set of results so far. The stock meanwhile doesn’t give a damn; it’s near 1 year highs. But at some point all this optimism must translate into numbers, no?