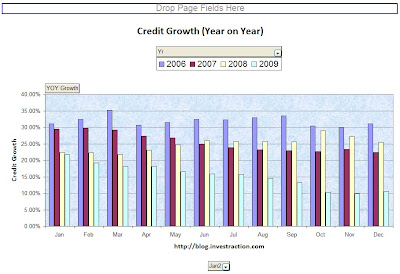 Early days but December seems to be the first uptick month since October 2008. This seems to show in the Reverse Repo data as well. (Reverse repo is when banks put money with RBI because they have no better use for it and will not consider giving to me instead)

The amount of money that banks parked with the Reserve Bank of India (RBI) plummeted on Tuesday and Wednesday, to Rs61,090 crore and Rs59,435 crore, respectively, the lowest numbers seen in the current fiscal and far lower than the approximately Rs1 trillion of overnight money that funds-flush banks have been parking with the central bank over this period.

The fact that banks are parking less money with RBI means that they are perhaps using the money they have in deposit accounts for other purposes, such as buying government bonds or lending to companies and consumers. The other possibility is that companies have withdrawn money from banks to pay higher advance taxes.

So, it is too soon to announce a new momentum in bank credit. Annual bank credit growth as of 21 November was a mere 11.5%, compared with 30%-plus growth in the boom years.

Today was a mere 53,990 crore. Interestingly, the 10-year bond yield has gone to 7.64% – though technically that is part of a contango trade, since we’re in December; liquidity is moving to the 2020 bond from the 2019 bond, and the 2020 bond is trading at 7.50%. This is wonky because the tenures are around the same – but the earlier maturity bond gives you 0.14% more, which is like a 6 month deposit paying higher than a 1 year one. If this happens consistently across multiple maturities then they will call it the Inverted Yield Curve, but it tends to happen when people move from one kind of bond to another.

(Usually this would result in some arbitrageurs shorting the far bond and buying the near one – remember lower yields mean higher prices, so the far one will quote at a higher rate relative to the near bond. But RBI places restrictions on shorting bonds, and the facility is only available for on “CBLO” (Collateralised Borrowing and Lending Obligation) which is only available for institutions. You can of course short interest rate futures, and the yields are 8.21% – a much lower rate on the future, meaning you can’t short it for as much profit or any at all. Worse, you have to rollover every three months – and the rollover spread is negative for shorters. )

If you don’t understand the above paragraph, ditch. It’s not that important.

What’s interesting is: From 100,000 cr. a day to 50,000 cr.; is this because banks are lending again? Or is it that people have pulled out money from banks and put them in other avenues? The former is a sign of growth – and with inflation where it is, there is going to be an interest rate hike in the offing. The latter is an indicator of a bubble or a liquidity problem, or both.

We’ll know how credit growth happened this week after two more weeks (Credit growth reports come once every two weeks) That should give us some ideas. We like to refer to ourselves in the plural every once in a while just so we feel a little important. Yes, it’s been that kind of day.