John Mauldin asks: If this is recovery, where are the taxes?

I can find no single source of recent sales tax information. It is all one-off, but it is consistent. Sales taxes in my home state of Texas are down 12.8% year-over-year, and we’re in the fifth straight month of decreases of 11% or more. Projections are for sales taxes to continue to decline into 2010.

There is a very revealing study by the Pew Center on state taxes, called “Beyond California” (http://www.pewcenteronthestates.org/). Everyone knows how bad California is. The Pew Center looks at how the rest of the states are doing, and focuses on 10 states that also have severe problems. Sales tax receipts are down 14% in Arizona, and state income taxes are down 32%.

On average, revenues are down almost 12%. Oregon has seen their revenues collapse a stunning 19%. New York is down 17%, with a deficit of 32%. Illinois has a projected deficit of 47% of its budget, second only to California with 49%. You can see how your state fares at http://downloads.pewcenteronthestates.org/Beyond_California_Appendix.pdf.

The Liscio Report notes that all states had negative year-over-year sales tax collections in October, and the weighted average decrease was 10.2%, down from a negative 7.2% in September. (www.theliscioreport.com)

Sales at Wal-Mart stores slipped by 0.4% in the third quarter. Actual government figures show that retail sales were down 1.5% in September from the previous month and 5.8% year-over-year. So how do we keep seeing headlines about retail sales being up, as unemployment keeps rising?

Coming to India – and looking at total taxes, I find the picture just as rough. Here’s the tax data till September: 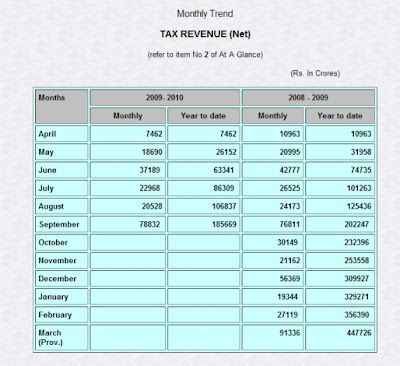 Tax collections are down about 8% from April this year. September was the first month where the monthly collections were HIGHER than last year, but there have been one-time events like the second part of the payout to government employees (60% of arrears) that was made in September. In all the government isn’t getting nearly as much revenue as the growing India story demands.

Direct taxes (think Income tax) seem to have gone up a little bit, a 4% growth with about 1.73 trillion (lakh crore) collected till October end , versus 1.67 trillion last year October end. (I really need to chart this)

There’s two issues here – our tax collections which grew at a 20-30% clip in the last few years, from greater reporting and solid growth, have come down to negative or flat levels. This has two bearings:

Will be interesting to see how this evolves. In the markets, we’re back above 5000 levels, and with a P/E of 20+ again and a dividend yield of 0.99%, which is discounting a growth story that doesn’t quite seem to be there yet. As for taxes – they have to grow – I’m hoping the Diwali sales growth will show up in the indirect tax collections (data for Oct will be released in December). Watch this space.