About 4.5 million Indians live and work in the Gulf region and remit more than $10 billion annually, according to government data. The turmoil may affect remittances, said Thomas Issac, finance minister of the southern state of Kerala, which accounted for about a quarter India’s migrant labor in 2005.

Dubai World, the emirate’s investment company, roiled markets as it sought a “standstill” agreement to delay repayment on much of its $59 billion of debt. Dubai suffered the world’s steepest property slump in the global recession, with home prices dropping 50 percent from their 2008 peak, according to Deutsche Bank AG. Most Indian migrant workers are employed in the Gulf’s construction industry, according to the government.

“It’s quite likely that Dubai will face a severe downturn in the real estate and financial sectors and that will affect remittances and jobs,” Issac said in an interview at his office in Thiruvananthapuram yesterday.

Remittances from the Middle East account for about 25 percent of Kerala’s economy, Issac said. India received $52 billion of remittances last year, according to the World Bank, making it the world’s largest recipient of money from migrant workers. China got $49 billion.

But this can’t be a fallout of the debt default, can it? Construction seems to have stopped a long time back, and Dubai’s economy, at least for migrant workers, should have been in the toilet by now; the slowdown was evident for over a year. If anything, the remittances from Dubai should have reduced substantially by now; and the Dubai World default won’t suddenly cause it to drop. The WTFness of that headline prompts my post.

Turns out remittances haven’t dropped much, yet. World Bank estimates that overseas Indians will remit $47 billion back to India this year. (November data) 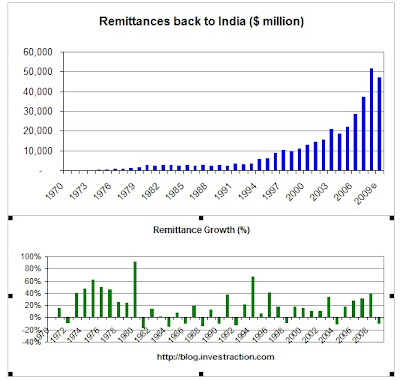 We’re down about 4 billion for the year, from 2008’s record $52B. That’s not much of a fall. Dubai can’t be much impact, honestly – Dubai’s total debt is $80B and Indian migrant workers, especially those in the construction area, are probably the lowest paid in the lot.

There’s some exposure to Dubai by various firms, like L&T’s $25 million receivables, or Bank of Baroda’s 4,000 cr. loans. (more here) But the exposure to Dubai World is stated to be really low; yet, since DW is just a holding company, the repurcussions of a default may take time to realize. Still, it’s a little late to start worrying about remittance drops; all we can do in India is check corporate exposure – and that seems to be what D. Subbarao really meant.