RBI’s friday press release on the Scheduled Bank Business in India as of Oct 23 shows a slight problem with Credit Growth, which is now at 9.69%, the lowest in (at least) three years.

Here’s a chart of credit growth in the last three years: 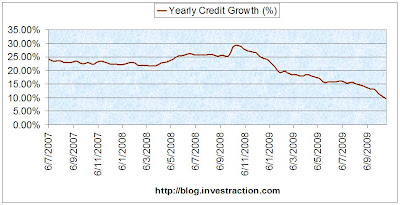 Now it’s possible there’s a seasonal impact; Diwali last year was in November and this year, it was in October. Credit should usually peak during Diwali, one would think. 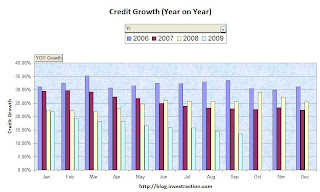 If you take monthly averages (the reports are fortnightly so usually two figures are available per calendar month), there isn’t too much of a visible impact of seasonality – or you would see spikes in Oct/Nov. This year has been bad throughout, but look at October, it’s a two story building in a land of skyscrapers.

The underlying figures show food credit dropping by 6,000 cr. and non-food credit dropping 15,000 cr. in the fortnight from Oct 9 to 23. That’s not great news, considering Diwali was on the 17th. What, people took loans and paid them back just after Diwali? I don’t think so!

The drop in credit growth isn’t quite followed by a drop in deposits – which dropped only 8,000 cr. Banks are still parking upwards of 1 lakh crore – a trillion rupees – every single day in the reverse repo window. This doesn’t make sense – the reverse repo pays 3.25%, a lot lesser than deposits demand.

RBI is trying to push for credit growth, but at the same time wants to control inflation if it rears its ugly head. For that, the Statutory Liquidity Ratio, or what is mandated for banks to invest in Government securities, is back to 25%, a 100 bps revision upwards. And importantly, windows that were opened for NBFCs to borrow directly from the RBI have been closed. (Normally, only banks can borrow from RBI)

More importantly perhaps, is the increase of provisioning for commercial real estate loans. To simplify: when a bank lends money it is required to “provision” some of that money from capital against that loan.(not from the deposits or any other money it borrows, but it’s equity). This used to be 0.4% for Commercial Real Estate loans – it’s now 1%. That should scare off banks from overlending to this sector, just a little bit.

But all of this was done after Oct 23 – the date of the last available credit growth statistic. In about 15 days we’ll see how banks have lent AFTER the RBI policy change; it’s horrific to see a sub 10% credit growth number when your economy is supposed to be growing at 6% (typically credit grows a 2.5 to 3x multiple of GDP growth).

I’ll do another post on bank results – they seem to have done lousy in the banking area and well in the trading area, which reflects in credit statistics; after all, if you’re making enough money trading, why bother to lend? This sounds like it applies universally. But these are famous last words…