PM Senthil Kumar, a Delhi-based executive, booked a flat in Omaxe’s project called Galaxy in Sector 112, Noida. Since 2007, he has already paid over Rs 10 lakh to the developer. However, when work on the project did not start even two years after its launch, Kumar applied for a refund. He says he had booked the flat not because he wanted to speculate in property, but because he needed a place to live in.

Kumar says Omaxe has shattered his dream of owning a house. “I have visited their office and requested for refund with interest. They are not agreeing to this. They also say that they will not refund the money before December 2009. And even then they will only refund the principal. It means that my money is stuck with them for more that two-and-a-half years.” He said when he enquired with the developer about the project, he was informed that the New Okhla Industrial Development Authority (Noida) had not given them possession of the land for this project till date because of a compensation-related issue with farmers. “How can a developer book flats without even owning the land? Isn’t this a fraud?” asks Kumar.

I’d written earlier about under-construction properties being a royal pain to purchase. The Indian express article highlights nearly all the problems one could face:

I have family living in one project mentioned – Omaxe Nile on Sohna Road – where it’s true that Omaxe hasn’t provided full project reports on the water, electricity etc. Sewerage is handled through trucks which ply in and out every day – the connection to the city system is not done. (Though they have taken a “deposit” for it!) In a recent storm, the 8×8 foot window frames in many houses caved in; they weren’t glued properly. Omaxe randomly added square footage to the project before registration – there was just no way to verify. They’ve not yet handed over the documents to the RWA, contrary to the article’s note – and that’s because they’ve not given enough documentation for a handover to take place.

Even where I live, Park View City on Sohna Road, the developer has delayed construction of a gymnasium though we’re nearly at 80% occupancy. But things are dramatically improving here now – as they are in the Nile – as the residents take control. In the time we have been here, in both the Nile and PVC, swimming pools have come up, parking has been streamlined, maintenance has been perked up, security procedures set in place etc. ; all the hard work has been done by the residents, even though they have to pay very hefty monthly charges (upwards of 3k a month per apartment) to the builder!

There’s little wonder why I will never recommend under-construction properties. You don’t want this kind of hassle. At least when you buy a ready property you can bypass the mudslinging between the early adopters and the builder; you get to examine what you will eventually live in; and the early problems will have been sorted out. The prices may not be very different (they’ve not gone up in the last 12 months) though this will depend on the stage of the market.

Omaxe’s share price, at Rs. 123.15, is near a one year high of 130. It’s recovered a lot from the lows of Rs. 40, but way below the all time highs of Rs. 600. The builder’s just gone through a ratings downgrade from Fitch (which means nothing; Fitch reacted WAY after everyone knew there was a problem, look at the stock price). 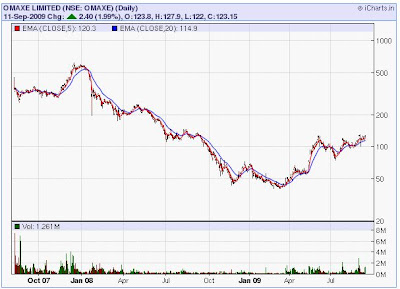