Nifty closes at 4782, a 15-month closing high and a pretty strong close. Are we out of the woods? From a yearly high perspective, it seems like a strong breakout. Let’s check out some of the technicals. First, the Nifty Chart: 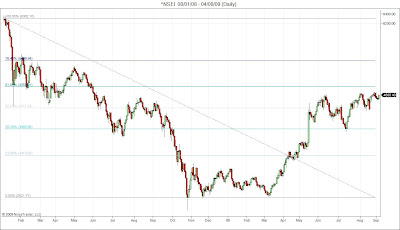 The Nifty just broke out of that last bar – I haven’t been able to coax NinjaTrader to download it today. I’ve drawn “Fibonacci” retracement lines, from the high of 6300 in Jan 08. (Not because I believe in them, but so many traders seem to that it becomes a technical reality, a self-fulfilling prophesy of sorts, so it’s worth watching).

To the fibo folks, the real retracement limit is around 4850. Beyond that is a new uptrend – the funda being, a huge fall will usually retrace between 50-61.8% of it’s fall, and then resume falling down. So the Nifty will really have broken out of this “pattern” only beyond 4850. It’s not too far away, but the resistance till now has been really hard.

Let’s also look at this break out with a volume perspective. 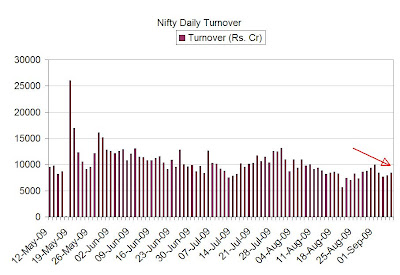 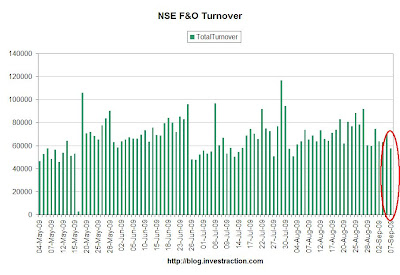 The breakout isn’t on great Nifty volume. More troubling is the F&O turnover statistic; today was the lowest turnover in the last month. One could attribute it, perhaps, to the labour day holiday in the U.S. which means not many U.S. managers would be participating. But FII’s bought over 1000 cr. today, so it couldn’t have been that reason.

Either ways, the real breakout, in my opinion is yet to come. Last troubling fact: nearly no new yearly highs are being seen in frontliners like Reliance, ICICI bank, Bharti, SBI. The stuff that’s zooming? Midcaps and small caps, and stocks like Tata Motors, Unitech, Jindal Steel. Accumulation in the midcaps and distribution in the large caps? Sounds like December 2007!

Would be worth watching for: Breakout with a much larger volume, break of the artificial fibo barriers, new highs in nearly all of the front line stocks.

(On the SoS note, I’m retaining the stop loss for all positions, will get out when they break.)