Updated: ICICI prints a retraction, and ICAI says it denies such allegations. 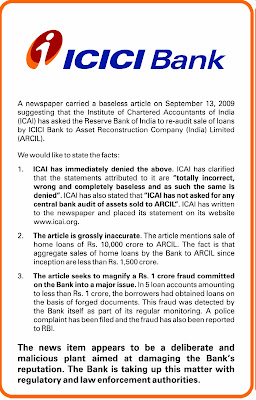 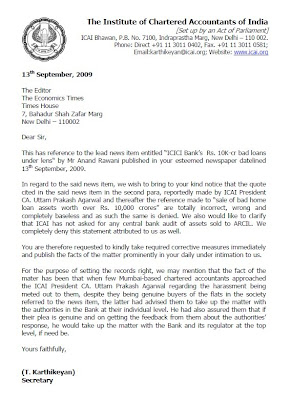 That’s strange – Arcil (co sponsored by ICICI) bought more than 11,000 cr. of loans from ICICI as of March 2008 (LiveMint). The figure will be more now? Only 1500 of that is home loans? And if ICICI screwed up on some home loans it can’t screw up on the other regular loans?

The regulator should re-audit assets sold to ARCIL,” ICAI president Uttam Prakash Agarwal told SundayET, referring to the sale of bad home loan assets worth over Rs 10,000 crore by the bank to the asset reconstruction company.

ICICI Bank is accused of lending money for the purchase of some apartments in a housing project in a Mumbai suburb, and in some cases twice for the same set of apartments.

According to the chartered accountant who spotted irregularities, the bank disbursed home loans for the purchase of 15 apartments in the Ritu Paradise Project developed by S R Developers in Mumbai’s Mira Road. Documents available with ICAI and in SundayET’s possession show that double loans were issued by the Bank on some flats.

These loans were part of the block of bad loans sold to ARCIL, which helps banks to free up capital by buying such loans and seeks to recover them.

Although the loan amount for these 15 flats were only in the region of only Rs 2-3 crore, the accounting regulator is of the view that the bank bears responsibility for selling off these bad loans to ARCIL without verifying it.

A spokesman for ICICI Bank admitted that such an incident had taken place. “When this asset was sold to ARCIL, this was not identified as fraud. The builder fraudulently recreated the entire documentation and sought finance. Such frauds are a challenge to the industry,” he said. On the issue of loans being issued twice for the same property, the ICICI spokesman said: “Since there is no central database, it is almost impossible to track whether any loan has already been given against a specific property.”

But ICAI said this episode exposed holes in the bank’s systems. “In four cases, double loans were issued by ICICI Bank itself. This shows the inability of the bank’s IT set up and its due diligence mechanism,” Mr Agarwal said.

Did the bank officials know that Arcil now owned the loans, and thought they could get away with a second mortgage disbursal on the same property? Then it’s fraud. If not it’s a gross oversight, and ICAI is right in that ICICI should take the hit.

What this does is brings the entire 10,000 cr. into doubt; so all loans sold to Arcil will be under a scanner. Not just to verify against the underlying properties; they will need to check against all ICICI bank’s current other loans as well. Future sales of loans to Arcil will be hit; from now on the due diligence will be tighter and more clauses introduced. And will that hit growth? When you can’t get rid of bad loans, they sit and rot your balance sheet until they are written off, keeping NPAs high till then.

Funny, I got rid of this in the SoS due to a stop loss. But will the fundamental story hurt the stock price? Let’s see.