Time for an inflation revision. Latest is -1.58%, but the graph doesn’t look like it’s falling very much. (Click for a larger image) 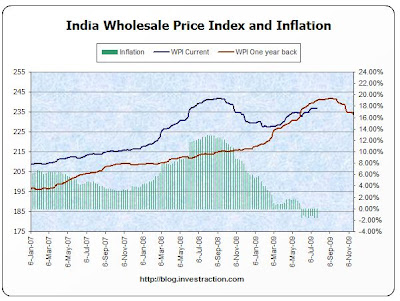 What’s interesting is the past revisions – for nearly three months ago – are higher than one thinks, making the graph a very spiky one. What might change things? A massive change in oil prices, for one, or the dollar dropping 10-15%. Plus, there’s the bad monsoon – though I think there’s been enough hoarding to last us a while.

The 10 year bond yield, meanwhile is at 7.09% – I don’t know how I’m still positive on the gilt fund, but it’s still on a plus for me, and I’ll probably redeem it pretty soon if the prices go much lower. I’m still not convinced we’ll inflate, or that the crisis is over.

People say inflation is a mislabelled thing, look at the price of sugar etc. But inflation considered is always urban, and urban people have far lower food based expenses than rent, travel, clothes, wages and clothing – none of which have increased much. Some of them have gone down. I used to think it was only gadgets – now it’s in everything.

There’s a call for a better inflation index than the WPI – and it’s a work in progress, as the Urban CPI. Of course, I hope we don’t do the U.S. makeover by introducing “substitution effect” (People will eat jaggery when sugar is expensive, so let’s use the jaggery price instead), hedonics (“You get a better computer for the same price today, so let’s put a lower price instead, to reflect the betterness”) or Core CPI (“Oh, Food and Energy are impacted by factors other than the country’s real economics, so let’s ditch them and report CPI”). (Read this link) OH, and the gloriously insane “We’ll take housing inflation as equal to the rent an owner may get, instead of the actual increase of price of the house”. The US managed to get great GDP growth in “real” terms because of the low CPI numbers.

I don’t even know how India calculates GDP growth – but if we’re factoring WPI then this year will definitely yield 6.5%. We’re not saints, I think it’s more important for our folks to keep inflation high rather than to see it close to zero. However, the next few months will be critical even for WPI; at the rate we’re going, we’ll see headline inflation in two months.