RBI releases the total bank credit every fortnight. The latest total bank credit value (Food + non-food credit) adds up to 27.77 lakh crore. But you gotta look at that figure in context. Bank credit has been growing at a healthy clip over the last three years. 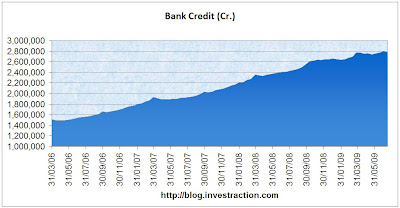 One would expect that an economy growing at 6-8% will have a credit growth of that much – multipliers are around the 3x region.

But the picture changes as you start looking at this financial year – 2009-10. Let’s look at credit growth on a year-on-year basis, that is, today minus the number one year earlier. 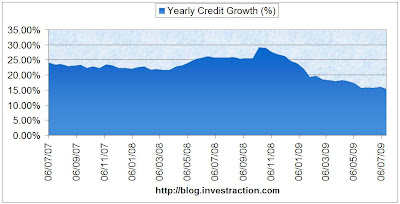 Since 2006, we’ve seen y-o-y credit growth stay above 20%. There was a surge in October-November 2008, a near 30% growth, and this could be attributed to the fall in the markets and Lehman; a lot of loans were provided, perhaps on a short term basis, to tide the crisis over, plus there was the whole issue of banks having to lend to Mutual Funds and NBFCs which didn’t have access to the RBI. Since then RBI opened up its lending to let Mutual Funds and NBFCs borrow, which would have reduced the amount of credit provided by banks.

The worrying thing is the scene in 2009. There has been no crisis, and indeed our Q1 results seem to be great (more about that in another post, but let’s take it at face value). Yet, bank credit has been slowing. It dipped below 20% growth in Jan 2009, and since April has been steadily falling – as of July 17, the last reported figure, yearly bank credit growth at 15.35%, the lowest since March 2004.

Plotting it month on month shows any seasonal impact, so let’s see what it looks like. 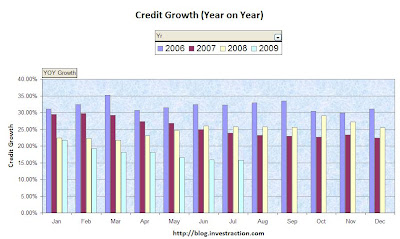 March seems to see a rise in credit – this time there was a DIP in March (compared to Feb). There is some small seasonal element in credit, but a monthly comparison shows this year has seen a slowdown all the way. Credit growth seems to increase in the monsoon months – yet, this time it’s been steadily decreasing. This may be due to the bad monsoon this year – food credit tends to go up till August and reduce from there, though this time too, Food credit went up to 60,000 cr. in June, and has dropped to 48K cr. in July. (Note that this chart only sees absolute numbers, not growth rates)

Credit growth overall: End March 2009 saw a total credit figure of 27.70 lakh crore. July 17’s figure was 27.77 lakh crore. That’s a 0.65% growth in this financial year, not quite impressive. (Though it must be said that in FY 2007-08, we saw something similar, and there was a sudden upmove in the last four months of the fiscal year)

At this point, the y-o-y credit growth rate is at 15% and with a multiplier of 3x, this will only scale India’s GDP by 5%, a figure that is currently unacceptable to anyone in power. Food credit will come down with the bad monsoon, and that will reduce credit from rural areas some more. Urban non food credit needs to make up for this – and in a large way, just to play catch up. Given there was a blip in October last year, we should see y-o-y credit growth continue to come down till November, but it as to show a significant rise after that, just to get to the 6% odd GDP growth expected this year.

Early days, so I shall keep tracking this data. No conclusions drawn, yet. It’s too early to say anything.

(Btw, does anyone have any links to where we could divide credit into home loans, personal/credit card loans, working capital and corporate term loans? Anything by geography or urban/rural?)