NYT: Will China Continue to bankroll the U.S.?

Over the past decade, China and the United States have developed a deeply symbiotic, and dangerous, relationship. China discovered that an economy built on cheap exports would allow it to grow faster than it ever had and to create enough jobs to mollify its impoverished population. American consumers snapped up these cheap exports — shoes, toys, electronics and the like — and China soon found itself owning a huge pile of American dollars. Governments don’t like to hold too much cash, because it pays no return, so the Chinese bought many, many Treasury bonds with their dollars. This additional demand for Treasuries was one big reason (though not the only reason) that interest rates fell so low in recent years. Thanks to those low interest rates, Americans were able to go on a shopping spree and buy some things, like houses, they couldn’t really afford. China kept lending and exporting, and we kept borrowing and consuming. It all worked very nicely, until it didn’t.

The most obviously worrisome part of the situation today is that the Chinese could decide that they no longer want to buy Treasury bonds. The U.S. government’s recent spending for bank bailouts and stimulus may be necessary to get the economy moving again, but it also raises the specter of eventual inflation, which would damage the value of Treasuries. If the Chinese are unnerved by this, they could instead use their cash to buy the bonds of other countries, which would cause interest rates here to jump, prolonging the recession. Wen Jiabao, China’s premier, seemed to raise this possibility in March, in remarks to reporters at the end of the annual session of China’s Parliament.

It’s increasingly obvious that unless the U.S. consumer continues to spend, and spend on cheap Chinese imports, China will not prosper and thus not continue to buy Treasuries.

Two factors make this difficult. First, the U.S consumer is saving a lot more than he has been in the recent past. 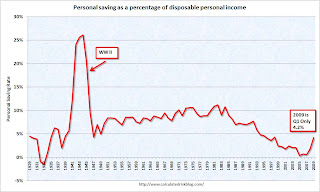 Unless the average income is going up, or the availability of credit is increasing (when you could save more but spend just as much) saving more must mean spending less. Given that GDP is contracting and unemployment is at an all time (number) high, average income is unlikely to be going up. And credit – hey we just came off a credit crisis and are deleveraging (meaning credit will come down). Savings thus, are cutting back on spending – okay, that is obvious enough anyhow – and lowered spending means the Chinese hurt.

Second, the signal the U.S. administration is giving is that a recovery must mean the re-employment of Americans. Which is taken to mean “buy American” – although it’s likely that buying Chinese will feed a lot more American middlemen and companies. And the administration is penalising those that take any jobs abroad – even the ones at the bottom of the chain.

China could still recover if it fuelled domestic growth, one thinks? From the article:

Bumping that figure up will require cheap credit and at least five years; plus you have to change the frugal mentality of the average asian. Not quite helpful in the near term – and definitely not useful for U.S. treasuries. After all, why bother holding huge amounts of a foreign currency when a substantial amount of your GDP is internally fuelled; think of that as the equivalent of the U.S. holding the Euro as “reserve”.

China’s attempts to push the Yuan beyond it’s borders is significant. If the U.S. continues to protects it’s banks and go down the Japanese way, the U.S. Dollar will go down the route of the yen. That will mean some other trade currency, which could be the Yuan if China is serious enough. In the short term though, there is too much co-dependence to do something drastic or fast.