DLF has gotten a reprimand from the BBMP – Bangalore’s Mahanagar Palike, or Municipal council on it’s Westend Heights project.

The BBMP has cautioned the public from booking apartments in this project as the builder has not taken approval from the competent authority. In a public advertisement dated April 26, DLF had announced opening of bookings for its proposed apartments and said the Bangalore Development Authority’s (BDA) approval had been obtained to build up to four floors. The BBMP said according to the advertisement, the apartment complex consists of 18 floors and not four as mentioned. The project consists of 1,980 units spread across 19 towers that are stilt+18 floors high.

The actual ad is below (click for a larger picture) 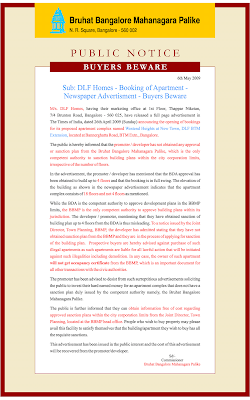 While getting actual sactions later is common, it’s obvious that DLF hasn’t even done the basic groundwork of what it takes to get BBMP on the same page. It must be quite a crisis to get slapped on the wrist from those they would scramble to keep happy at any cost.

Btw, Moneycontrol says 600 homes have been sold. I hope they get their money back. But at this point I wouldn’t hold my breath.

I have decided NEVER to buy a house that isn’t ready to move in immediately. Builders will delay. They will change specs and you won’t be able to do anything. And then, they will over charge and under-deliver on maintenance because they can. My parents have had a lot more trouble due to this, and I’ve learnt from them, and now from a number of friends stuck with yet-to-arrive homes, that a house is a house when it’s ready to move in.

Hey, I might even buy land and build my house – why not, at least I have some level of control there. But a paper plan from a “reputed” builder? No way.