I had talked about Sustained Insider Selling in Northgate Technologies, on a post dated Aug 21. On that day the stock was at 290. The chart then:

Look at where the stock is on Friday: 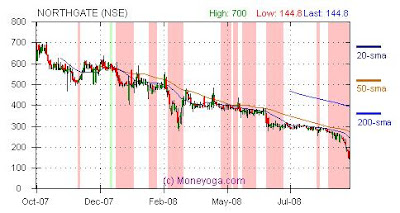 A drop to 145 is now halfway, in a month and a half. No more insider selling noted after that post, but someone’s been pulling the plug. No F&O – so no shorting – so it’s investors pulling out.