Shrinidhi Hande has an interesting take on what his investment strategy is: (Hat Tip: Anand Gadiyar):

With disappointment I looked at the pile of annual reports…and a damage control idea hit me. Tried to lift all those annual reports together and found the combined weight heavy enough. Next day when I heard old paper wala passing in front of my house, I called him and handed over all these annual reports. He looked at them with contempt and gracefully weighed them in his balance. When he gave me cash in exchange of these ‘old paper’ I realized that I have made more money by selling these annual reports than by means of dividends received.

So here’s my new renewed investment strategy for this financial year-Invest in companies which send big, thick and heavy annual reports. That way you’re returns increase.

Darn funny. And I think there are good uses of such annual reports – for instance, wasn’t it the public report of Enron that made the first set of short sellers see how badly they had managed the company? Also you can use them as a weapon in case you feel like throwing something, but it isn’t financially beneficial if the object at the other end is, for instance, a TV.

I have my own little need for these reports. Where I stay it’s very windy and I like to keep the windows open. My study door has no doorstop. My one year old son would push or remove any external doorstop I use at floor level. Annual reports come in handy: 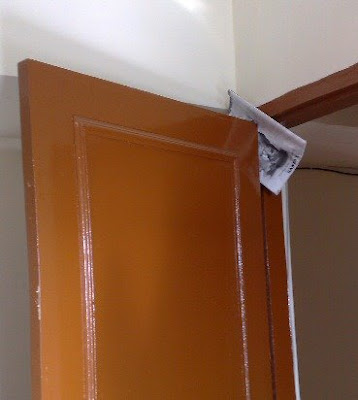 That’s the Ranbaxy annual report out there. Another door has Reliance. I am company agnostic.