Why is the volume in the NSE so terribly low today? As the Nifty stayed flat, the NSE Cash market showed volumes of about 16,500 cr. and F&O of 47,000 cr. – both showing dramatic decreases from the averages of the previous few weeks.

What is worrying also is a decrease in volume in the futures markets accompanied by an increase in price. Always a short term risk there. 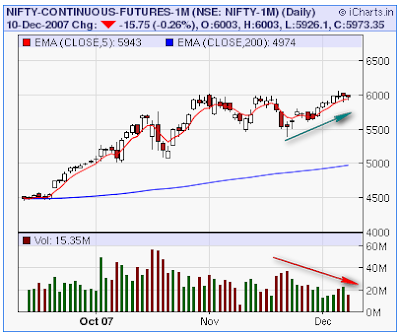 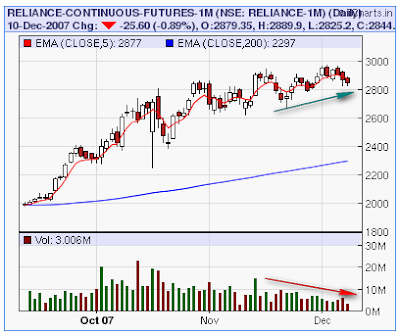 This seems to be a universal theme with large cap stocks though there is a lot of interest in smaller cap stocks (and worse, in stocks whose absolute prices are less than Rs. 500).

This points to a higher density of retail investors, at least to me. Logically, we should be getting lesser FII participation because of the subprime issues in the US and the PN concepts, The domestic institutions like mutual funds haven’t really bought a lot – though they’re flush with cash – in fact, they’ve bought less than the FIIs, and haven’t really done much – less than a 2000 cr. net buys in December. So who’s buying?

There’s action in select midcaps and small caps. Stocks like MRPL, Essar Oil, Escorts etc. are booming, and so is the whole smallcap index.

I’m net short the market right now. That’s not because I’m bearish – I just think that if the market goes down, it’ll go down big and if it goes up it won’t go up much. But the data is contradictory in a way – the only way to confirm this is to have a few big down days on *increasing* volume.

The fact is: The market is the ultimate authority. If the prices don’t go down, despite volume reduction, then there can only be one conclusion – everyone is waiting for the big dip. And if that is so, the best thing to be doing is buying the index. Right now it’s not time to act – it’s best to see where the next few weeks take us and then take action. Remember, don’t predict, react.

Trading updates: this short trade will be my last trade. After this I will either put my money on the index or in money market funds. I have to concentrate more on Moneyoga and will not have the time to track the market closely; eventually when we build the systems I might think of a small bit here and there, but for now the trading portfolio is shut and sealed. I didn’t make a hell of a lot – about 18% in two months, but there were a lot of learnings. The big takeaway – don’t let your emotions screw you out of the trade.

Note that the fed is probably going to cut rates by 0.25% tomorrow. It will only exacerbate the subprime problem, in light of recent events (which is essentially giving a few borrowers the ability to stretch their “interest only” rates to five years more) – the idea being, if rates come down, the higher fixed rates of interest given to borrowers in 2005 and 2006 will prompt them to default anyhow. The fed reducing rates will not bring capital to India this time – I don’t understand how the fed rate should affect Indian equity – if anythign, it should give US equities a boost, perhaps even at the cost of India. The next few days will be very interesting!