Carbon Credits (or CERs) are being traded on the European Climate Exchange, at the current price is 22 Euro per CER.

SRF, in its various quarterly reports, have announced sales of CERs either as amount recovered or sales made. Assuming about 20 euros per CER and a conversion rate of 55, I calculated that SRF has sold about 51 lakh CERs to date. They still have 35.6 lakh CERs available to sell, and with prices looking up the current stock should yield about Rs. 392 cr. in the market.

Given that they are looking at being issued about 38 lakh CERs every year, they should have an inventory of about 74 lakh CERs, which can yield about 830 cr. as revenue – for this, we can assume around 40% margin (giving 60% to costs for future CER generation) – meaning that additions to profits would be 332 cr, or Rs. 49 per share.

They made Rs. 43.2 EPS in FY 2007, and going forward just the CER inventory looks good generate a good growth. Now I don’t know if SRF will continue to sell CERs and generate revenue, or if the CER market will remain this buoyant. But SRF looks poised to earn bumper profits from just CER sales, apart from its regular belting, refrigerant gases and technical textile business (where it is a major player in India and the world).

The current price (which shot up today to Rs. 171) gives SRF a trailing P/E of 4, and the growth prospects look good enough to move the EPS to beyond 50 at least. The current spike in the price is not on very big volumes, but the stock moved in the later half of the day and is worth looking at. 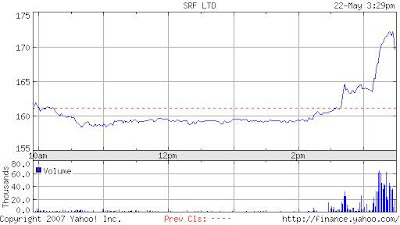 There are some negative stories about the management of this stock which portray them as not the nicest to other shareholders. I don’t know if there is any truth in them. But the stock seems to be showing some momentum, which I believe should lead to a target of Rs. 300 in a year.

I must present a more detailed study, but at least the carbon credit story is a start.

Disclosure: I hold this stock.