I’ve invested in stocks, on and off, for a while now and while I tend to talk about some of the stocks I’ve liked and have done well, let me tell you about the investments that have resulted in losses for me. I’ll start with Marksans Pharma.

Some fundas: Open means I still own the investment, Closed means I’ve sold everything at a loss. And my losses are based on the average buy price and the average sell price of a stock.

Stock: Marksans Pharma
Lost: 50%
Period: 6 months
Status: Closed
Why I invested: Sharekhan, where I have a brokerage account, released a report on this company stating the growth prospects in March 2006. I purchased the stock around Rs. 230, for a target of Rs. 360 according to Sharekhan. The company was formed merging Tasc Pharma and Glenmark Labs, with huge manufacturing orders from companies abroad, in bulk drugs. The company also had a research model that was working on a male contraception molecule. At a P/E of 42, it was expensive, but the growth looked like it would contract the P/E and result in a revaluation.

What happened:
The stock hung around Rs. 230 level for a while, and in the big kahuna crash of May 2006, plummeted down to Rs. 100 or so. I held on, because I was stupid enough not to have a sell rule, plus I called it “long term” since I only bought in july. A sell rule would have helped me exit the stock at about 190 but I didn’t do that.

Then the stock held on for about three months in the 100-140 zone. It announced dismal results in Q4 2006, after which Sharekhan released an update effectively telling me not to worry and that growth was still intact. I held on.

I then configured my sell rules for a 20% loss (max). This prompted me to look for an exit for this stock, which I decided would be around 120, and the stock was quoting at 115 at the time. Within a few days I managed to sell out all my stock at 118.

The situation today:
The stock is at Rs. 56 today. It has had a series of mediocre results and has never rebounded. Sharekhan still has it on their “recommended” list but has not provided an update since July 2006. Here’s the stock chart. 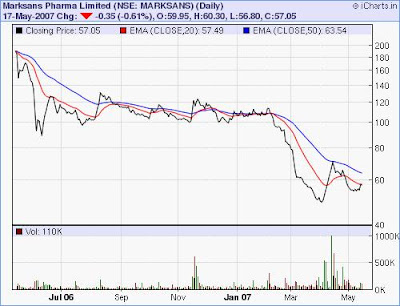 Fundamentals wise: the last four quarters have been very ordinary, and the last quarter 07 has actually shown a loss. The current P/E is 20, and income has dropped massively. Does not look attractive even at this rate.

What I learnt:
While you might think I blame Sharekhan, I don’t – the mistake was entirely mine. I did not have a proper stop loss rule. When the stock runs away downwards, you should sell it. My problem was – isn’t this is a buying opportunity since the prices are lower?

That was mistake no. 2: Fundamentals had changed. The company showed a bad quarter and the stock went spiralling down. I ignored the fundamental changed based on Sharekhan’s report, but I should have done some research myself.

One other thing I did was ignore this stock. In the May-June 2006 period, stocks were hammered down so I was looking at buying opportunities (I had cashed some of my stocks already). I completely ignored this stock because it was “for the long term”. When you make 50% losses, the stock has to rebound 100% for you to just break even! I should have sold this stock immediately – “long term” is just running away from booking the loss.

That’s investing psychology, actually – that people hate to say they have lost, so they stay in the game hoping that they will, at the very least, break even. The market is a great leveller – you have to learn to be humble, accept your mistakes and move on. And, as I learnt the hard way, much before you lose your shirt.

The Hidden Problem in JSW Ispat’s Offer For Sale

JSW Ispat was formerly Monnet Ispat, which went through a bankruptcy resolution. That brought its debt down and the shares continued to be listed, after a ...

Amber Enterprises – the brand behind the AC “brands” in India, the company with an unrivaled position in the domestic AC manufacturing business, and the ...